“Who owns the Moon“?

Who Is Dennis Hope? Lets Meet the Man Who Owns the Moon.

In 1980, a very bright, young and handsome Mr. Dennis Hope, went to his local US Governmental Office for claim registries, the San Francisco County Seat, and made a claim for the entire lunar surface, as well as the surface of all the other eight planets of our solar system and their moons (except Earth and the sun). Obviously, he was at first taken for a crackpot, until, 3 supervisors, 2 Floors and 5 hours later, the main supervisor accepted, and registered his claim of ownership.

Dennis Hope then wrote a letter to the General Assembly of the United Nations, and the Russian Government documenting his claim and the legal intent to sell extraterrestrial properties. To sell property on the Moon. To sell land on planet Mars.

“I sent the United Nations a declaration of ownership detailing my intent to subdivide and sell the moon and have never heard back,” he says. “There is a loophole in the treaty—it does not apply to individuals.”

The US government had several years to contest such a claim. which they never did. Neither did the United Nations nor the Russian Government. This allowed Mr. Hope to take the next step and copyright his work with the US Copyright registry office. So, with his claim and Copyright Registration Certificate from the US Government in hand, Mr. Hope became what is probably the largest landowner on the planet today.

Since then the Lunar Embassy has sold more than 611 million acres of land on the moon as well as properties on Mars, Venus, Mercury and IO.

Property on the moon has even been sold to three former US presidents (George H.W. Bush, Jimmy Carter and Ronald Reagan) and over 675 well known celebrities.

In 2004 Hope formed the Galactic Government, a democratic republic that represents extraterrestrial landowners with a ratified constitution, a congress, unit of currency and even its own patent office. Click here to view a copy of the documents ratified and accepted by the United States and signed by Secretary of State Hillary Clinton.

Recently Dennis Hope and the Lunar Embassy have been presented a wonderful acknowledgment from the Congress of the United States.

“We at the Lunar Embassy are pleased that our work since November of 1980, is finally starting to be recognized by the United States of America government as being valid. This is a huge step in the official recognition by the USA for the claims we made and the diligence with which we have pursued our challenging quest. Finally a major world power has spoken to us and they have been kind.” 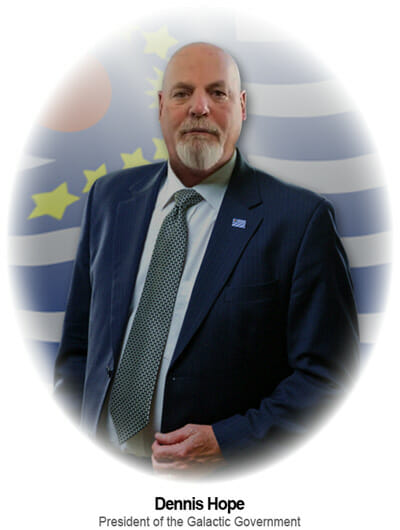